On Tuesday Year 6 had a science buzz day for their topic - Could Spiderman really exist?  Pupils learnt how to classify people and superheroes, using a classification key, before designing their own superheroes.  At the end of the day, Mrs Freeman left a very important item (USB drive) with year 6 to look after.  Unfortunately, however, they were failed in their mission, as it was stolen (by Spiderman?) leaving Year 6 to investigate the next day.

Year 5 also had a buzz day this week for their Science topic - Will we ever send another human to the moon?  Pupils learnt all about the phases of the moon and what it was like during the first moon landing.  They then designed and made models of moon buggies which they thought would be successful on the surface of the moon.  Also looking to the night sky, they learnt all about stars and how they are formed.  They also looked at the different star constellations of the Northern hemisphere and created star maps to show these. 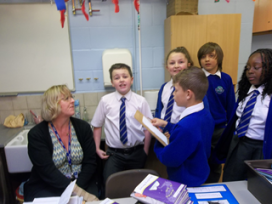